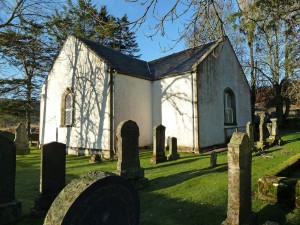 Croick Church is situated to the west of Bonar Bridge. The church is one of Telford’s parliamentary churches and was built in a well populated area which was cleared in 1845 when some 92 people were evicted to make way for sheep.

The church was built in T-Plan with a small belfry and latticed windows. It still has it’s original fittings including pews, communion table, pulpit and readers desk.

In 1840 a number of people from the area emigrated on a ship called the Hector to Pictou in Canada. The ship was chartered by the local minister and by the time the new minister arrived the village was devastated.

James Gillander, the factor of Major Charles Robertson of Kindeace, evicted the people without giving them any alternative. More than 80 people took refuge in the churchyard where they camped in shelters of tarpaulin and blankets. Their plight was reported in The Times and further evidence is scratched on the church window, see picture below. It reads ‘Glencalvie people was in the churchyard here May 24th 1845, Glencalvie is a wilderness below sheep’.

As the people themselves only spoke Gaelic it is thought the words are likely to have been scratched later, possibly by John Ross, shepherd in Croick, whose name appears several times.