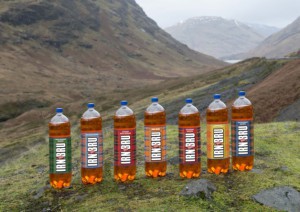 Irn Bru Scotland’s other national drink, after Whisky of course! The Irn Bru advertising campaign slogan is ‘Made in Scotland from Girders’. To mark the 30th anniversary of this slogan the Forth Rail Bridge was transformed with Irn Bru bottles appearing on it, quite spectacular!

It is produced by A.G. Barr of Glasgow, originally produced in 1901 it was called Iron Brew. This had to be changed in 1946 on the basis it was not actually brewed. So the spelling was amended giving the name Irn Bru.

It’s a carbonated soft drink known for it’s bright orange colour and has long been the most popular soft drink in Scotland. People find it hard describing the flavour, ranging from bubble gum or fruit to jam. Apparently if you taste it whilst eating a piece of dry bread it tastes like a jam sandwich.

Over the years the marketing has been very innovative and at times slightly risky with a great range of adverts. You can watch some of them here –

To sample Irn Bru and other amazing parts of the Scottish Highlands get in touch with Highland Tours Inverness and enjoy the phenomenal experience for yourself!