Today 30th November we celebrate Saint Andrew’s Day. He was one of Jesus Christ’s apostles, twelve followers chosen by Jesus.

He became Scotland’s official patron saint in 1320 when the Declaration of Arbroath was signed. Although he was well respected and admired in Scotland from 1,000 AD.

He died a martyr, being crucified in Greece on an X shaped cross in 60AD. This type of cross is also known as a saltire and this symbol makes up the Scottish flag.

The link to Scotland comes from the Picts building a monastery in the town now called St Andrews after the relics of the saint were brought here in the 8th century.

On the eve of a crucial battle between the Scots and English warriors, the Scots leader Oengus the second prayed to St Andrew. On the day of battle clouds are said to have formed a saltire in the sky. Oengus’s army of Scots and Picts were victorious and Saint Andrew was made patron saint of Scotland.

It is said The Saltire Flag, a white cross on a blue background is based upon the divine intervention in the sky and has been Scotland’s flag since 1385.

Up until the 16th century many made the pilgrimage to St Andrews, where remains of the saint were supposedly kept.

The 30th of November, 60AD is the date Saint Andrew was crucified. It is a bank holiday in Scotland, and marked with a celebration of Scottish culture. This includes food, music, dancing and messages from both the Prime Minister and First Minister of Scotland.

He is also the patron saint of Greece, Russia, Amalfi in Italy and Barbados where Saint Andrew’s Day is celebrated as the national day of Independence.

Google has recently marked Saint Andrew’s Day with Google Doodles here are a couple of my favourites. 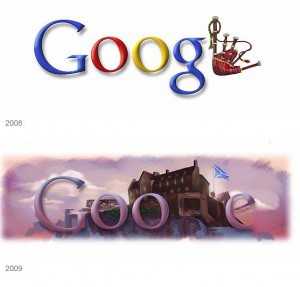 When visiting the Scottish Highlands for Saint Andrew’s Day celebrations or for any other reason, tour with Highland Tours Inverness and see the very best!