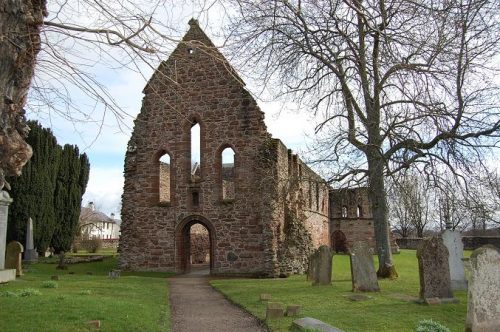 The Beauly Priory ruins are situated to the east end of the main village square. It was founded in the years following 1230 by monks of the Valliscaulian order from the Burgundy area in France. The monks also set up home else where in Scotland, Ardchattan, close to Oban and Pluscarden near the town of Elgin.

The monks had been invited to the area by Sir John Bisset, here they remained for 300 years, until the Protestant Reformation of 1560.

Upon arriving in Beauly the monks referred to the area as, Prioratus de Bello Loco, which is Latin for ‘Priory of the Lovely Spot’. This would suggest the popular belief that Mary Queen of Scots comment “Beau Lieu” or ‘beautiful place’ during a visit in 1564 was not the first reference to beautiful place or Beauly.

Only the church now survives, in the shape of a Latin cross. A seven bay nave to the west and a three bay choir to the east, at the junction flanking transepts exist to the north and south. Parts of the church were rebuilt in 1540s by Abbot Robert Reid.

It served as both a place of worship and burial. With some funerary monuments still to be found, dating back to 1479. This area being clan MacKenzie land, one dedicated to Prior Alexander MacKenzie, the other to Kenneth MacKenzie of Kintail can be seen. Other Mackenzie tombs are to be found in the north transept but this is usually locked.

Set in a very special, secluded location in the pretty town of Beauly, the Beauly Priory is a fantastic place to visit and can be part of a Scottish Highland Tour or an Invergordon Shore Excursion.