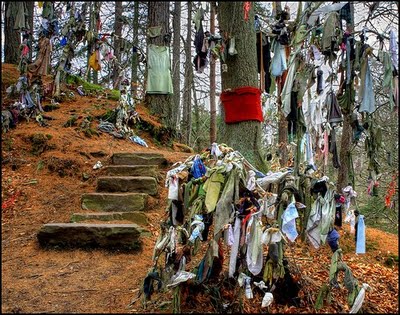 The Black Isle has many great places to visit, one of my favourites is the Clootie Well. A clootie well is a place of pilgrimage in Celtic areas. They are wells or springs and usually have a large tree growing beside them with strips of cloth tied to them as part of the healing process.

In Scotland and Ireland when using a clootie well the pieces of cloth are usually dipped in the water of the holy well and then tied to the branch while a prayer of supplication is said to the well’s spirit. Now a days this is usually a saint but in pre-Christian times it would have been a goddess. Mostly people are looking to be healed although some just wish to honour the spirit of the well. Variations of the practice exist including, washing the affected part of the body with the wet rag then tying the rag to a branch, as the rag disintegrates over time the ailment also fades away. At other locations the ceremony includes circling the well a set number of times and making an offering of a coin or stone. Other offerings such as religious medals, icons and crosses may also be hanging from the branches.

This clootie well near Munlochy is an ancient spring dedicated to the Saint Curidan where rags still hang on the surrounding trees and bushes. It was thought the well had the power to cure sick children who were left there overnight. Various items such as wool and human hair were also used as charms against sorcery or as tokens of fulfilment of a vow.

The Clootie Well can be visited if you are on a Highland Tour from Inverness or an Invergordon Shore Excursion.

In response to Covid19 a number of extra hygiene measures have been taken for the protection of all customers and drivers.

This will enable tours to be completed in a safe environment.

– screens installed in vehicles between driver and passengers (max 6 passengers)

– deep clean of vehicles between customers

Everyone’s health and safety is our priority

Stay safe and see you soon